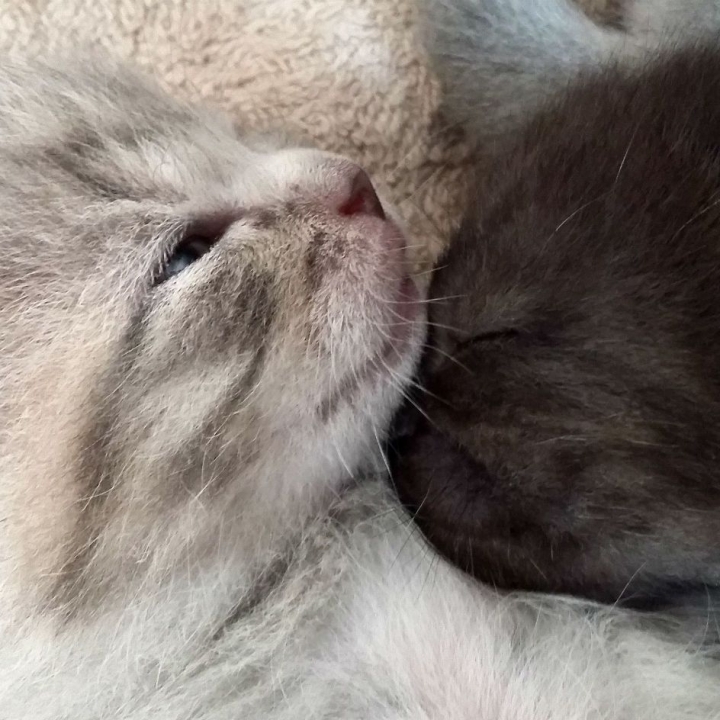 I’ve been drawn to cats for as long as I can remember. From my mum’s amazement at my ability to find a cat friend wherever we went to having to explain the scars on my right hand to schoolmates, cats have always been part of my life.

I can still remember the first feral I won around as a young kid. In hindsight I probably shouldn’t have picked a nursing mama cat as my first target and I definitely wouldn’t have so many scars today if I hadn’t. She was of course well past the nursing stage when we finally made friends but I had far better luck with her kittens.

It wasn’t until I was eight that I got a cat of my very own. My mum wasn’t really a pet person and she must have been understandably less than happy when my granny announced that she had arranged for us to have one of my aunt’s new kittens.

I remember going to my aunt’s farm, being shown a collection of cute kittens and later getting in trouble with my cousins for choosing the wrong one. I picked the pretty grey girl, called Sparky for her colourful markings, who turned out to be everyone’s favourite. But in my defence I didn’t know that at the time.

I imaginatively renamed my new furfriend Sindy and it wasn’t until years later that I learnt that cats with her colouring are called tortoiseshells or even that cat colours had names. I still have a thing for torties, something my fosterfail Dora would see as the natural order of things.

We started fostering Dora and Tig, along with their little sister Kali, when they were only three weeks old. We had recently moved into our first home and I couldn’t shake the longing to have cats again despite living in a small unit on the fifth floor.

Even at three weeks old the personalities of our new fosters were obvious. On the way home Tig was terrified and hissing at everything, Dora was interested in what was going on and Kali was chilled out and relaxed.

Dora, as her name suggests, was adventurous and soon worked out how to open bedroom doors, kitchen cupboards and the wardrobes. Kali remained relaxed, but was a bit of a princess, and Tig turned out to be a special project and made us worth hard to gain his trust.

I can’t say I enjoyed the experience of trying to find new homes for our furbabies and dealing with possible adopters myself was quite stressful. Of course it didn’t help that Tig treated every human other than us with fear and suspicion.

He would run and hide in the wardrobe when someone arrived, making it difficult to convince them they should take him home. This instinct is something he’s never really gotten over and it’s still his go to move with visitors.

Luckily he will eventually reappear if Dora is happy and it’s not unusual for him to take a look at overnight guests while they’re sleeping. Something that’s freaked out a couple of non-cat people over the year.

Life settled into a comfortable rhythm after Kali was adopted and the unit stopped feeling quite so crowded and Tig relaxed a little and started to rely on Dora to tell if he should panic or not. After fostering them for six months they had become family and adopting them ourselves seemed like the most obvious thing to do.

Apartment life suited us all for a while, although teaching the cats not to sit on the balcony railings was a bit hair-raising at times, but in the end we decided we could do with a bit more room. So we bought a house with lots of cat space and after we’d settled in and realised how much space we had filling it with cats was the next natural step.

So we decided to start fostering again and I looked for a no-kill organisation that focused on short-term fostering, so I wouldn’t become so attached. When I found out that the Animal Welfare League of Queensland also took care of the adoption process for us I signed up and we haven’t looked back.

In hindsight it probably didn’t help my ever-increasing mad cat lady reputation that I picked a rescue shelter located on the Gold Coast, a neighbouring region to Brisbane. Brisbane locals view travelling to the opposite side of the river as a bit of a trek and we were crossing the river and then some.

In the end we made the nearly 200 km round trip for collections, drop-offs and vet visits every few weekends for a few years. Thankfully the wonderful staff at the AWLQ made the process as easy for us as they could.

Even so after awhile the trek and loss of weekends was beginning to take its toll and we were very relieved when the League took over operation of a Brisbane council owned shelter, significantly reducing our travel time.

Until recently I never really understood or associated everyone’s view of me as a mad cat lady despite my husband’s jokes that I was only a shopping trolley short of being one or his threats to buy me a trolley for my next birthday.

I’ve always seen the MCL label has always been part and parcel of the misunderstanding, mistrust and mislabelling of cats and their behaviour. To me the anti-cat view was the odd behaviour while a love for cats, and all other animals, along with a desire to make life better and more comfortable for the animals in your life was normal and natural.

But over 130 cats later I’ve finally accepted the inevitable and decided to embrace it and have fun. So I’ve set up this website, joined Instagram and started to sell my cat photos and art online.

As Terry Pratchett once so eloquently put it…

“… you think you’re going to have a normal day and suddenly you’re in charge of a trolley with one squeaky wheel and an insane cat.”

Welcome to my catastic life, to you I may be a mad cat lady but for me I’m living the dream.

This site uses Akismet to reduce spam. Learn how your comment data is processed.

To play or not to play 🤔
The saddest eyes in all the lands 🥺
Sleepy kitten wriggles anyone? #happyFriday 🥰
Twinning it Thursday mini panther style 🥰
When you have to move to mako sure the camera can see you 😎📷
Has the bunny turned up yet? 🐰🐣